Letter to Commission on race and ethnic disparities 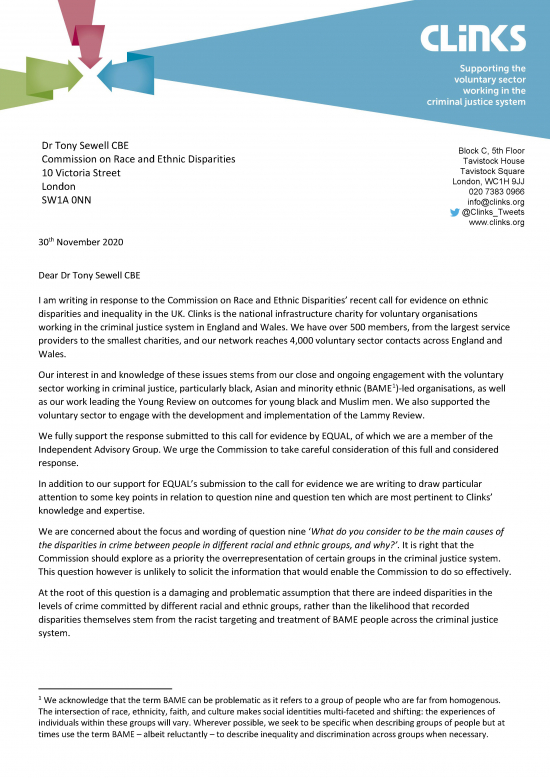 Letter to Commission on race and ethnic disparities

In this letter on 30th November 2020, Clinks submitted evidence to the Commission on Race and Ethnic Disparities to inform their inquiry into ethnic disparities and inequality in the UK. Our response largely focussed on question nine of the call for evidence, ‘What do you consider to be the main causes of the disparities in crime between people in different racial and ethnic groups, and why?’.

We expressed our concern that the focus and wording of this question reflected a problematic assumption that there are indeed disparities in the levels of crime committed by different racial and ethnic groups, rather than the likelihood that recorded disparities themselves stem from the racist targeting and treatment of black, Asian and minority ethnic (BAME) people across the criminal justice system. We urged the Commission instead to focus its attention on how policing and the policies and practice of the criminal justice system lead to disparities and, as recommended by David Lammy, where disparities exist how they can be explained or reformed.

Our response recommended that a consistent cross-government strategy is required to tackle racial inequality in the criminal justice system and reduce criminalisation of young black people, Muslim people and Gypsy, Roma and Traveller people. We also highlighted the extraordinary difference specialist BAME-led and specialist voluntary organisations can make and the need for their work to be supported by the government through long-term, sustainable and consistent resource.

We also support a separate and more detailed submission to the call for evidence made by EQUAL, who Clinks support through our position on the Independent Advisory Group.