We need to talk about… prison reform

The voluntary sector could easily be forgiven for not yet wanting to think too hard about the implications of the Prime Minister’s recent promise to make prisons "places of positivity and reform… places of care, not just punishment; where the environment is one of rehabilitation and mending lives".

At a time when so many voluntary organisations are still absorbing the impact of the previous administration’s Transforming Rehabilitation programme on their service users and on their own sustainability, this hardly feels like a good moment to be asking the sector to accommodate yet more change. Given the bleakness of the current budgetary outlook there is also a degree of scepticism about the promised reforms, with some commentators seeing them as just another way to strip cost out of public sector prisons, reducing even further the capacity of governors and staff to deliver positive change.

And yet… if the voluntary sector doesn’t seize this opportunity to speak up for a better way of doing things, who will? Who else can draw on such long and varied experience of working creatively with people in custody and ‘through the gate’, to describe the kinds of intervention that will help prisoners turn their lives around? Who else can give policy makers and autonomous governors the benefit of such an independent perspective, apart perhaps from academic researchers, if they really are intent on seizing the opportunity to do something radically better in prisons? 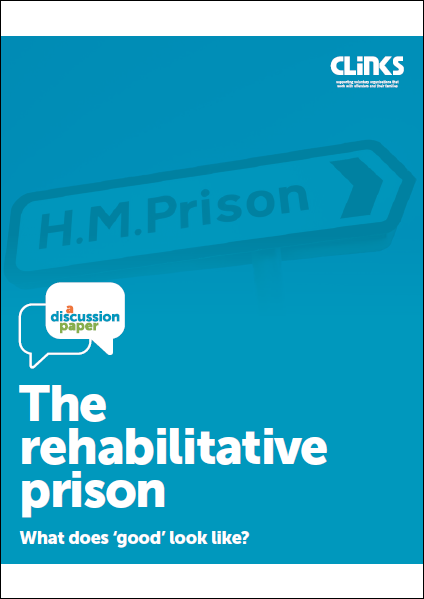 Looked at in this way, it feels vitally important that the sector should begin to articulate from its own unique position - and sooner rather than later - what ‘good’ might look like in a rehabilitative prison. It is for this reason that Clinks has produced an early discussion paper, 'The rehabilitative prison: What does ‘good’ look like?' As the author of the paper I can’t pretend it’s a quick or light read – which is bothersome when I know people are already so over-loaded – but I do hope voluntary organisations and other stakeholders will take the time to read and respond to the questions it poses. Here are just some of the issues raised:

For a large part of the older prison estate, it seems inevitable that reform to achieve a consistently ‘good’ standard of rehabilitative practice will be much less easy than in the newly built prisons and six identified ‘reform prisons’. This is because the existing structural and funding barriers can make it so difficult to deliver positive outcomes, no matter how committed the governor and staff. It may therefore be that, for many establishments, it will be more realistic to aim for a rehabilitative framework that is ‘good enough’, while working incrementally to bring all prisons up to the standard of the best. But if that is the case, what do you think ‘good enough’ would look like?

Over the coming months Clinks will be offering a variety of opportunities for these and other questions to be debated with our members and other key stakeholders, as more detailed proposals emerge from government about the intended reforms. In the meantime, please do read and respond to the discussion paper. Your input will help Clinks to ensure the voluntary sector plays a significant part in the reform programme from the earliest possible stage – and not out of charity but because it can deliver some of the central aims the government has set out. Please contribute your ideas and any examples or case studies that you think are representative of ‘good’ rehabilitation in prison, by emailing lesley.frazer@clinks.org