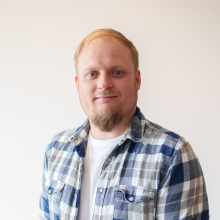 07904 978 086
Bryn joined Clinks in September 2018 after working in various roles within the third sector and local authorities across Wales. He initially began his professional career with Citizens Advice Wrexham working on a Gypsy Traveller engagement and community development project. He also spent time with Flintshire Citizens Advice developing an advice network in that county. He then moved down to Pembrokeshire to work with the highly acclaimed Monkton Priory Project which is an education unit specializing in inclusive education for Gypsy Traveller children. He was part of a Big Lottery funded programme called the Unity Project that had a wider remit to work with adult Gypsy Traveller community members in the West Wales region. The project eventually developed into an all-Wales project. When the funding for Unity finished, he then became the Gypsy Traveller Liaison Officer for Flintshire County Council.

Currently, Bryn is Clinks Senior Development Officer - Wales, a role in which he supports Clinks members and the wider voluntary sector working in criminal justice across Wales.

He lives in Wrexham, Northeast Wales, and in his spare time he is a keen runner and hiker, taking advantage of the beautiful scenery on his doorstep.