We all need critical (and supportive) friends 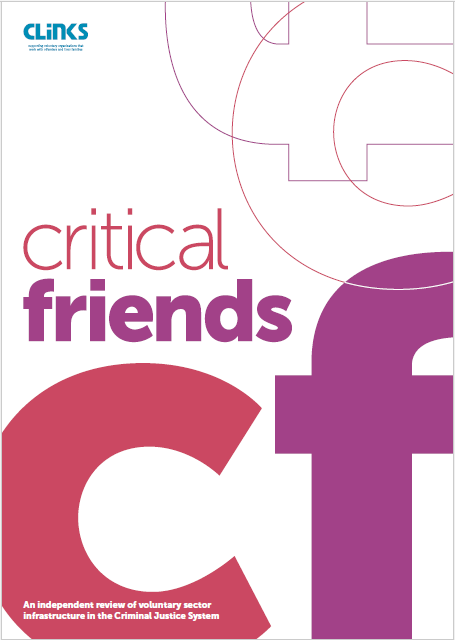 The independent panel, which was similar to the Independent Commission on Local Infrastructure that NAVCA convened, was informed by a survey, face to face evidence sessions from a number of key stakeholders, and four workshops that focussed on women’s services, family services, Black, Asian, and minority ethnic organisations, or generic criminal justice related organisations. We would like to thank the 157 organisations for their time and views, and for supporting the future direction of organisations like ours, as well as Government’s relationship with criminal justice voluntary sector infrastructure.

We were heartened to hear that organisations are largely happy with the services Clinks delivers, but we also need to make some changes. The panel reflected that stakeholders saw the value of infrastructure and welcomed its role as a critical friend between the diverse interest of the voluntary sector, and the range of government departments with responsibility to support people in the Criminal Justice System and those at risk of offending.

The independent review was clear that there’s no excuse for stagnation or complacency, especially as the political, economic, and operational realities change around us. We know that funding for infrastructure services is reducing, but we must keep doing the right thing, rather than being led by available funds. Fundamentally, we need to be led by our members, listen to local experiences, learn from them, and act as appropriate.

The independent panel reflected that government needs to make the most of their relationship with infrastructure, recognising its independence and value as a conduit to a large and complicated voluntary sector that fundamentally underpins the effectiveness of rehabilitation and resettlement services in the Criminal Justice System.

The report makes ten recommendations in total, five for infrastructure organisations like Clinks (which I think makes essential reading for any membership organisation), and five for government. I decided to put them into my own words, giving my own interpretation of the recommendations; they are listed below:

What infrastructure organisations should do…

What government should do…

The independent review couldn’t have been conducted without the kind support of a dedicated panel of professionals from the sector. We would like to thank Debbie Pippard (Barrow Cadbury Trust & chair), Rod Clark (Prison Education Trust), Pauline Crowe (Prisoners Abroad), Janet Crowe (Prison Reform Trust), Clare Jones (WomenCentre), Lucy Perman (Clean Break), Simon Fulford (Khulisa), and Mark Woodruff (The Monument Trust). They oversaw the collection of all the evidence, and also took evidence from a range of government officials and private sector representatives.