Has probation been transformed? The voluntary sector’s story 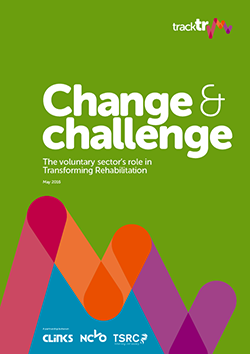 Fifteen months after the launch of new probation services and the implementation of Transforming Rehabilitation - what has changed? Today we launch our new report 'Change and challenge' that summarises the voluntary sector’s experience and makes seven recommendations for change.

The probation service has undergone radical change, with Probation Trusts split in 2014 into a public sector National Probation Service (NPS) and 21 new Community Rehabilitation Companies (CRCs) owned since February 2015 by eight, primarily private, providers. The NPS advises courts on the sentencing of all offenders and manages those presenting higher risk of serious harm to the public, while CRCs supervise offenders presenting a low and medium risk of harm.

These reforms have had a lot of recent attention, with the National Audit Office and Her Majesty’s Inspectorate of Probation recently publishing reports into Transforming Rehabilitation. There is a growing body of evidence as to how new services are bedding in, which we hope this new Clinks report will add to in a constructive and informed way.

When the new CRC providers were announced, the Ministry of Justice stated that '75% of the 300 subcontractors named in the successful bids are voluntary sector or mutual organisations' and that the voluntary sector would be 'at the frontline of offender rehabilitation'. However, since that announcement it has been almost impossible to gauge what role the sector has been playing, with no official information in the public domain about the voluntary se

ctor’s involvement in supply chains, what they are delivering, where, or how much they’re funded to deliver it.

Over the last fifteen months since new probation services were launched, the voluntary sector has taken the time and energy to work with Clinks and lay out their experiences; for that we are very grateful. We have received over 300 survey responses accross two surveys, over 90 attendees at a consultation event, and various meetings and phone calls to help guide us through our understanding of the ‘on the ground’ reality.

There are concerns out there in the voluntary sector, some of which need immediate attention. The transformation of probation has been slow. Local voluntary organisations are struggling to find the investment that might keep them alive, yet their vital rehabilitation and resettlement services continue to get frequent referrals; 50% still receive and accept referrals from probation, and over two thirds receive referrals from prisons. These organisations support people to reform and their closure could have serious consequences for communities, families and people who desperately need the right assistance to change their lives.

“We have closed our referral system as we can't manage our services without additional resource”. – Survey respondent

Only ¼ of the 151 voluntary organisations surveyed were being funded by a new Community Rehabilitation Company (CRC), and only 1 had direct funding from the National Probation Service (NPS). Of those that are being funded 70% are delivering pre-existing services, delivering the status quo rather than transformation. Those that did receive funding were disproportionately larger voluntary sector organisations, with very few smaller or medium sized organisations represented.

“We have been told the premise of Transforming Rehabilitation was the meaningful involvement of small and local organisations. In reality, the exact opposite to that has happened”. - Survey respondent

Many voluntary sector organisations could not say whether Transforming Rehabilitation had negatively or positively impacted on services or service users, possibly because of the slow pace of change. But those that had seen a change were more likely to report it as negative rather than positive; in some cases considerably more likely. Only 3 in 10 organisations felt that the level of funding provided by CRCs allowed them to deliver a high quality service.

The voluntary sector’s relationship with probation is being negatively affected by a lack of communication, with many being left in the dark as to what is happening. This has led to reports of confusion and uncertainty about what services are being offered, where, and by who.

“Since TR we have very little (almost none) direct contact with senior CRC managers. We are left to ‘paddle our own canoe’. Communication is a one way street. ” – Survey respondent

What we are going to do

Clinks and NCVO, with the support of Third Sector Research Centre, will work closely with the Ministry of Justice, probation services, and the voluntary sector to take practical steps that change the direction we’re heading in. We have made seven practical recommendations for change that involve more transparency, better communication, support for quality services, and championing the survival of local services that help change lives. If you want to raise any specific concerns then please email clinks at TRtracking@clinks.org.

Please also read NCVO's blog written by Nick Davies, public services manager, who's supporting of this work has been invaluable.